So we plan for the girls (eeee! I still get a little inner squeal every time I say that. I’m soooo looking forward to experience of watching sisters grow up together.) to share a room in the new house, and I’m having a blast planning how we’ll decorate it.
They’ll have the largest of the ‘secondary’ bedrooms. In the video, it’s the one at the end of the hall on the right, with navy blue walls and multicolored polka dots. Cute, but I’m dying to re-paint it. Probably soft green, and keep the doors and trim white. 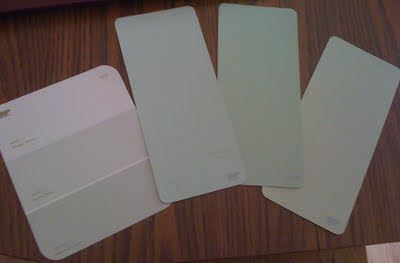 I want to get this quilt for Susannah and the matching crib bedding for Baby.

Since there’s so much lavendar in the bedding (the sheets will be lav gingham, the bedskirt is solid lav) I think it will play off green walls nicely. Plus, it should be a soft, feminine room while remaining neutral for resale in 4-5 years.
I think we’ll get Susannah a white bed, and depending on the timeline, we’ll probably go ahead and get Baby her own crib. (Susannah is still sleeping in her crib at 2.5, quite happily. Baby will probably sleep in our room for at least the first six months, so she won’t need a crib until Susannah is 3. By then, she may well be in a big-girl bed — so we can give her current crib to little sister. On the other hand, if she’s not climbing out yet, we might just have two cribs in that room for a while!)
I’m not sure if we’ll put a dresser in their room – the closet in there looked HUGE to me, so I think with some low shelving added, and bins for socks & underwear, it might be all we need for clothes.
I’d like to get them at least one low bookshelf, and I think the wooden kitchen and doll cradle will live in their room.
*~*~*~*~*
And while I’m on the subject of the rooms, here’s the plan: the smallest one, which is currently bright pink, will become the office-slash-sewing room. We were originally thinking of making it an office-slash-guest room, but the more we look at the video… the less we think we can fit a double or queen bed in there along with a desk and a couple of bookcases. So instead, we’re going to paint it a nice neutral (I want a light almond or sandy brown; Chris is leaning toward a darker grayish brown) and it will house Chris’ desk and medical bookcases and my sewing machine desk and probably a bookcase for my fabric stash and books/patterns.
The medium sized room at the end of the hall will be Jonas’, and he LOVES the paint in there. He’s declared it an “awesome Spider-Man” room! Eventually I think he’ll get new furniture – he wants bunkbeds, which sounds like fun. If he gets twin/twin bunks, we’ll probably pass his full mattress set down to Susannah.

What a Colorful World!

After a fun family movie night, I’m settling in

Midweek in Mäksēlife I kept this week simple wi

Rain pitter-pattering outside the window and a war

I painted this little portrait of our home a few y