Life is too crazy when we move. I have been neglecting the blog anyway — and now it’s just ridiculous. I sent a “catching up” email to a few friends, so I realized I could use a few excerpts to update here as well.

On Tuesday, July 5, I took the kids to playgroup. We went to Sterling Skaggs park, and it was SO bloomin’ hot. But they got to see the Hughes’ and the Wrights, and the Fergusons and the Parkers and the Chirchs and Davies and the Purtells and probably a few others I’m forgetting at the moment. When it was time to leave, I just cried and cried pulling out of the parking lot. Susannah said, “Mommy, you cry a little bit?” and Jonas said, “It’s okay, Mom. When we get settled in you will feel better and won’t cry so much.” (I guess we’ve been using that “get settled in” phrase a lot.)

By the time we got home the packers were done! Jonas laid down on his sleeping bag and napped pretty hard, and Susannah napped in her crib (which they hadn’t taken apart yet).

Wednesday morning the crew arrived late – which was frustrating, because when we called the main office they couldn’t reach the driver (apparently his cell phone was dead!?) so he had no idea when they were coming. They finally got to our house a little after 10:00, and I left for the mall with the kids. We took home Chick-Fil-A for lunch, ate with Chris, and by then the downstiars was loaded on the truck. So we went down there, put a movie on the laptop, and gated off that bottom doorway to keep the kids out of the movers’ way. BUT IT TOOK THEM FOREVVVVER! The driver had had heart attacks and told us he wasn’t allowed to do lifting :-z So instead of 3 guys working, it was just 2 and they didn’t finish until after 6 pm.

At that point, we still had to finish the cleaning up, get the kids some dinner, and then we had a four-hour drive ahead of us. I just didn’t think I could do it – I mean, I’d be driving probably 7-11 pm! And then we’d have to unload our cars to even be able to put the kids to bed. Not good. So we put the kids right to bed, finished cleaning up the last few things, and set our alarms for 3.am.

We got up EARRRRLY Thursday morning (July 7), loaded up the cars, and hit the road. If you’re on Facebook I’m sure you saw my posts that morning– we were only five minutes down the road when Jonas threw up the first time. And then it happened every 15 minutes for the next 3 hours. Poor guy!! I still don’t know if it was a real virus or just his nerves about moving. We had gotten both kids a bag of “yay for moving day” little gifts, and one of Jonas’ was a Pillow Pet Mini, and he puked on it the very first time and I had to stick it in a bag to be washed. (Luckily as soon as the washer/dryer was unloaded, we started washing the puke laundry and he got his Pillow Pet back the next morning at the new house.) He went through all his clothes, all the towels we’d brought with us (can’t pack all of them if you want to take a shower that last day!)…. the booster seat cover was gross… Ugh. It was just awful. And I felt SO bad for him, he was pale and shaky and miserable. Susannah, on the other hand, could not have cared less that he was barfing right beside her — I guess I’m thankful for her iron stomach. 😉

About an hour away from Owensboro, he finally stopped, and when we got here he was totally perky again. Running through the house, putting Batman stickers on the wall of his room 🙂 –he really cheered up.

The movers got here at 11:30 and they were done unloading by 3:30. THAT was a good feeling! We started unpacking the kitchen, but that was about all we tried to tackle the first day. We had two minor issues – one leg of our coffee table broke, but two new clamps from Lowe’s and a little wood glue fixed that – and one drawer-pull on my dresser broke, but I think I can fix it with SuperGlue. But overall, we were really happy with their work.

Friday and Saturday we kept unpacking, and made trips to Walmart, Target, and Kroger. Whew! It’s amazing just how tiring it can be.

Sunday was dramatic (another repeat if you’re on Facebook!) — first visit to a new church, and Jonas caught the business end of block with his face. SO, lots of blood and crying and swelling and sadness. Then he pulled his own tooth out and felt like a million bucks. Chris took him for ice cream (which is their lost-tooth tradition) and I broke out the new circular sprinkler (worth every penny of that $9 at Target!!!) for both kids to run through. So the day ended on a nice note, at least.

We continued unpacking, and Chris took his degrees over to the office – they will hang them in one of the exam rooms. I’ll have to pop in and take a picture at some point. 🙂 We’ve been shopping for a kitchen table and found one we all really liked, so that was nice. One of the ladies at Chris’ office recommended a second furniture store, and they had the same table for $200 less! They had to order it for us, but I’m happy to wait “three to six weeks” to save that much. We’ve taken care of new drivers’ licenses, new car tags, new voter registrations, new library cards… and we went back to Settle Memorial UMC this morning for a much less eventful visit.

I was feeling very stressed and frustrated this afternoon about everything we still need to do around here – I feel a little bit like everywhere I look is just a bare wall, an empty space, a box that still needs to be unpacked. Chris was really good about reminding me of everything that IS done, so I’m feeling better. (Moving is emotional. Pregnancy is hormonal. Combine the two, and there’s bound to be a few meltdowns, eh?)

I’ve been making these neat-o pin boards at Pinterest with ideas for decorating and furnishing all these new spaces, and I think it’s helping me organize my ideas a little bit and plan the priority list for what we need to buy first. 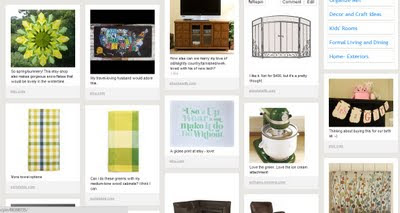 Strength for today and bright hope for tomorrow…

At least she was being quiet.

How to Practice Hospitality During a Pandemic