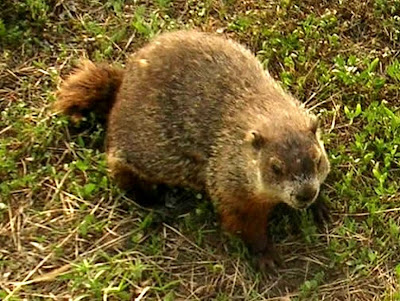 We had been dating for sixteen months when Groundhog Day 2001 rolled around. That night, we went to the movies to see “The Wedding Planner,” and when we got back to the Hill there were still a few hours until curfew. We were hanging out in my room, watching CSI: SVU (of all things! ack!) when suddenly Chris hopped up. “Hey, I think my mom left that magazine in my car for you. Do you want me to go get it?” [Trish had seen a copy of Southern Living Weddings with a beautiful cake on the cover, and picked it up for me. She was in Rome that evening while we were at the movies, so she had left it in Chris’ car in the dorm parking lot.] “No, that’s fine, I’ll grab it when I walk you out at curfew,” I told him. But he was already standing… and then he was on his way out the door. “No, I’ll just go get it for you!”

A few minutes later, he was back in my room. He handed me the magazine, and I flipped it to the page his mom had marked with a Post-It note. It really was a pretty cake. I think I turned a couple of pages… and then Chris, who was still just standing there, leaned close. “Wouldn’t you rather look at this?”

I glanced up at him, absolutely clueless as to what was about to happen. He was holding a dark blue, velvet box – the top was open – and nestled against the white silk lining was the adorable perfection of the ring we had seen at Ford, Gittings, & Kane downtown a few weeks before.

(We’d gone to the jewelers “just to look,” Chris had said, so he could see what style of rings I liked. Unbeknownst to me, when Chris got his refund from Shorter for the semester, he had trekked back over to FG&K and bought the ring. It had been hiding out in his sock drawer ever since.)

I gasped. I grinned. I waited.

I meant to say ‘yes.’ But what came out of my mouth was, “Just try and stop me!”

So he put the ring on my finger and we kissed and giggled and took pictures of ourselves and kissed a little more. Then we called my parents, and my mom said, “Ohmygosh, you’ll always remember Groundhog Day now!” We stared at each other, dumbfounded. Neither of us had realized it was a ‘holiday,’ much less a silly holiday revolving around a rodent in Pennsylvania… but she was right, we have had a fondness for Groundhog Day ever since.