What’s Up With the Workouts?

A couple of weeks ago, my friend Sarah linked to a thought-provoking fitness article. The author wrote about how sometimes women get a little too hung-up on using our bathroom scales. She claimed that we ought to only weigh ourselves once annually at a doctor’s office. (To be fair, she went on to explain that a woman’s percentage body fat was more important than an arbitrary number o the scale, and suggested that her readers should pay attention to how their clothes fit and how their bodies feel during the 364 days of the year they aren’t stepping on a scale.)

Now, I can’t get on board with once-per-year weights. In my [albeit, inexperienced] opinion, while you’re in the postpartum-weight-loss phase, it is reassuring to see that you’re making small progress from week to week. And on the other side of the coin, it’s good to keep an eye out and make sure you’re not losing weight too fast; as a breastfeeding mom, research suggests that 1 pound per week is the safest amount of weight loss.  But I’m at “the bottom of the hill” right now – I’m 3.5 pounds away from my weight when Abigail was conceieved, and that point is about 5 pounds away from what has been my default “healthy” weight over the last dozen years. So the article made me realize that I definitely don’t need to hop on my scale every single day (which I really didn’t do anyway) and I could probably stop checking every week as well (I had gotten a habit of weighing myself on Saturday mornings).

I think it was a commenter on the original article (or maybe it was a subsequent article I read later the same day – you know how internet bunny trails can be!) who suggested a compromise of weighing oneself once a month, at the end of your cycle. That sounded like a better idea to me. And Sarah, my friend who got this whole thought-ball rolling, is a courageous woman who’s been taking her own measurements and posting them on her blog!!! during her weight loss journey… which made me think about doing the same thing. Well, okay, I’m not that courageous: it made me think about taking measurements. I won’t post them on the blog!

Anyway… all of that is a lead up to another update on the workout situation. I chart my cycles, simply because I started doing it in 2004 and it’s a habit now!, so I started noting my workouts on my chart. Those pieces of information don’t HAVE to go together, but it works for me. The nice thing about keeping track that way is that I know that over the last 30 days, I did 11 workouts. 🙂 Since this is still a ‘developing’ habit and not a fully-ingrained one, I’m pretty happy with that. It also gives my type-A, over-organized little heart something to geek out about, because for this coming month I plan to also keep track of which workout I did on each day so I can make sure I’m being balanced… and of course, I get to compete with myself and try to increase my number of workouts for the month.

The last time I weighed myself was February 21, and I also took my measurements. Today I weighed myself again to kick off a new cycle, and there had been no weight loss. Hmmm. Bummer. But then I measured…. and I lost 1/2″ from my chest, 2″ from my waist, 2″ from my hips, and 1.5″ from my thigh. Holy cow! I’m no expert, but it must be a fat-versus-muscle thing — because I weigh the same but I’m taking up less space to do so. Ha! 🙂 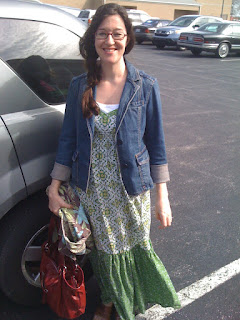 And as a really random side-note: found this sundress at the consignment store yesterday (wish Chris had panned back a little bit so you could see my lime-green toenails to match!). I don’t know who  in town is getting rid of all her Ann Taylor 6petites, but I was happy to grab them!

In Which I Do Not Know What I’m Doing

As Fast As You Can

1 thought on “What’s Up With the Workouts?”