First Week in the Books

Monday, August 6th was our first day of school! This year, Susannah got first-day-of-school gifts too. In years past, I’ve given schulteute – but I took the easy route this year with purchased bags. They each got a little toy (a Cars 2 vehicle for Jonas and a pair of “Zoobilies” for Susannah), new pencils, new sidewalk chalks, and a coloring book. 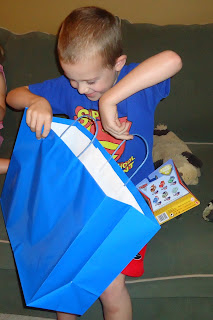 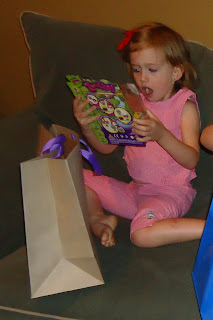 We are working through Tapestry of Grace – Year One, so our first week of school covered Creation through the Flood. One of my favorite things about this curriculum is that it’s designed to include all the children in a family. Littles can talk about the topics in the very simplest way, older kids learn more in-depth. But we’re all talking about the same things over the dinner table.
“Extra” books from the library to supplement what we read with TOG were out on Susannah’s table for her to look through. I had paper and coloring books out for her, as well as some little activities which I could pull out to occupy her while Jonas was working on something that needed my attention or some quiet. 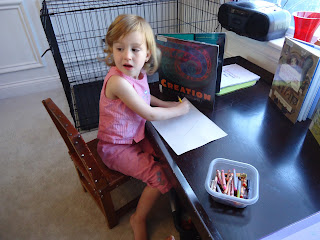 This was a baggie of foam letters I’d preselected so she could spell her name. She recognizes all her letters and knows the letter sounds; she knows how to spell her name orally. This activity gives her a chance to “match up” the letters she hears herself say aloud with the visual of the letter forms in the proper order for her name. 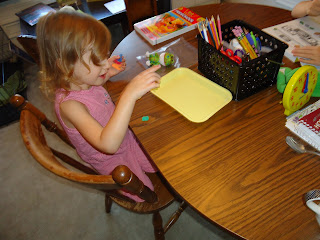 Little People Noah’s Ark! Susannah and I did this together while Jonas did a math sheet independently. I’d pull an animal out of our basket, and she’d find its mate. Then she picked an animal and I’d look for the mate. When we were done, we counted all the people and animals boarding our ark. 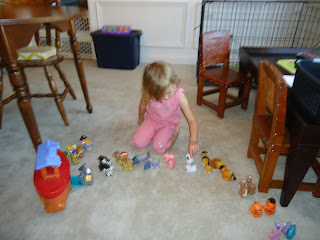 A friend of mine posed a question on Facebook this week after I shared something about our week – how do you take care of the younger kids when you’re doing school? Well, for one thing, most weeks Susannah will be going to Parents’ Day Out at our church on Mondays, Wednesdays, and Fridays from 9-12:30. That will give me several hours for work that needs focused attention. When she is home with us on Tuesdays and Thursdays, we’ll do hands-on projects in which she can participate, and I’ll have activities like the ones I’ve shown her for her to do. I just sort of bounced back and forth this week between getting S started on a task  – then getting J started – checking on S – answering J’s question.
Abigail is still in that stage when she’s generally happy to just crawl around the room we’re in. When she’s ready for her morning nap, we all just went upstairs and the big kids had “room time” while I nursed her down. Once she was asleep, I’d turn on the baby monitor and we’d all head downstairs for a snack and then get back to work. Naptime is a perfect time to do anything messy or more involved! 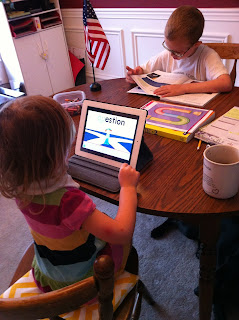 Putting words from the whiteboard in alphabetical order. 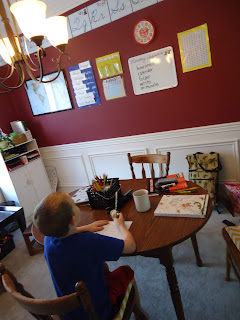 When we were wrapping up last year, I asked Jonas for input on what he liked most and least during school. And I asked what he most hoped to learn & do in second grade. His favorite thing “is doing projects” and his least favorite was spelling and “long writing.” He was really looking forward to learning “harder math” and “doing lots of projects.” So another really appealing part of TOG is the amount of hands-on project ideas included. I’m going to make every effort to hit as many of these as we can, because I believe they will really solidify his understanding of what we’re covering — and because I know he loves it.
By the way, Jonas’ definition of “doing projects” is anything that requires “supplies.” Cutting, gluing, taping, illustrating. If we get to recycle cardboard and plastic in the creation of a project, even better!
Below, Jonas made a Creation Booklet – one page illustrated each day of the Creation Week – for his Unit Lapbook. (Tapestry is divided into four, nine-week units. He’ll make a lapbook to summarize his learning for each unit. This is going to knock his socks off!) 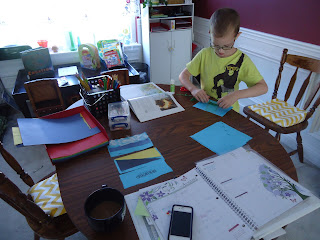 For this week’s geography studies, we discussed the layers of our earth. On Friday, we got out some brand-new jars of Play-Doh and made models of the inner core, outer core, mantle, and crust. 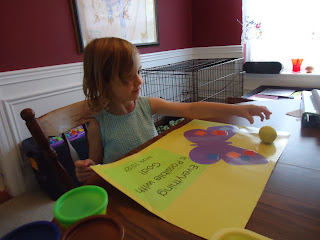 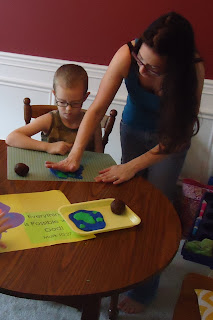 Then we cut our models open to see how the layers build upon each other. This matched what we’d read in our Usborne Encyclopedia of Science – but it’s so much more memorable when you make it and hold it in your hand! 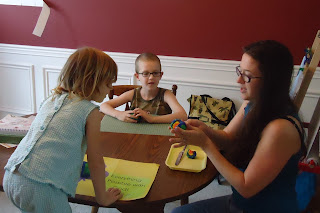 After making our models, Jonas wrote a response page for his notebook… 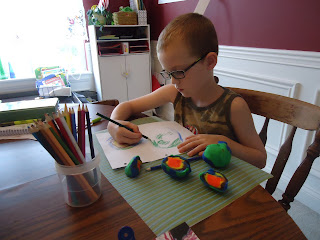 …and Susannah smooshed and squished until she had an enormous blob of brown goo. 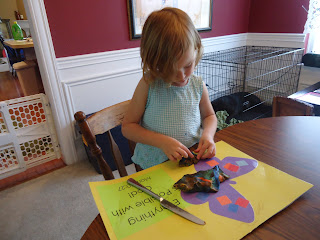 In addition to learning about Earth’s layers, we also discussed the movement of Earth’s plates (earthquakes! subduction zones!) and the theory of plate tectonics. We watched a National Geographic documentary about the movement of the plates when Pangea broke apart and formed the continents and oceans we have today.
Not fully a “school” activity, but our first issue of National Geographic Kids magazine arrived this week, too. Susannah liked flipping through it, and Jonas was able to read it independently. I’m sure we’ll have lots of those “bunny trail” learning conversations thanks to this subscription! 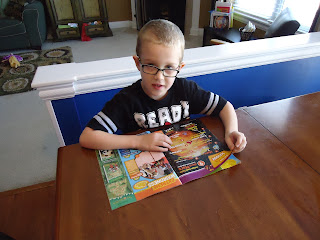 This was the most tiring first-week-of-school we’ve had so far. Part of that is probably just par for the course of homeschooling one child who still needs a great deal of teacher-directed time and having a preschooler and an infant-on-the-cusp-of-toddlerhood. Part of that is because I feel a need to do more prep work with Tapestry than I did with our everything-Abeka year last year.
But even though I’m tired, I’m really pleased with how it went. I had all three, all day (Parents Day Out won’t start until next Wednesday) and we managed to get ALL of my planned lessons done. The house got a little ragged by the end of the week, but Friday after lunch I made the kids pitch in and help clean up. So other than a mountain of laundry on Sunday, we had a really pleasant weekend in a fairly tidy space.
I doubt that I’ll be able to post weekly wrap-ups every single week, but I’m going to try to keep taking plenty of pics. Like I said, we have a lot of fun projects to look forward to this year! (Next week: ancient Babylonia/Sumeria… Abram’s life in Ur… the tower of Babel… making a model ziggurat. Seriously, how fun is that?)
And finally – also not technically a school picture, but hey: look what Miss Abigail is up to lately! She’s pulling up everywhere. Still my smiley, happy girl – and so far still a mix of her big siblings’ personalities. She is not quite as laid-back as Jonas, but not quite as energetic as Susannah. She’s signing “milk” and “all done” and says “mama” and “dada”. In a week, she’ll be eleven months old. I guess I need to start planning a birthday party soon! 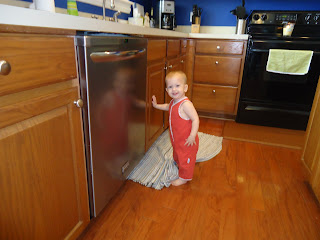