Sing along: We are family! 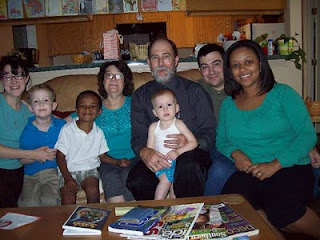 Sunday morning, we all went to church at Westside Baptist (where my dad pastors). Susannah provided a little object lesson for us by running up onto the stage, pointing at the cross, and calling out, “Jesuh!” She clambered up the choir risers trying to get closer to it. After the opening music, my dad held her in his arms and commented that we all ought to be trying to get closer to Jesus – closer to the cross. It was beyond sweet.

At the close of the service, the whole congregation gathered around our family to pray for Mom, for us, for her doctors… it was such a wonderful experience. To know that we are supported & lifted up in prayer is a help I can hardly put into words.

We had a great ‘family’ afternoon hanging out, fixing lunch, listening to the three little cousins run around and holler and giggle. Mom said that was about as good a medicine as she could imagine.

We made it here. Our GPS brought us by a new route since I requested the “fastest trip” setting, so we took 1-75 to Knoxville and then 640 and I-40 East toward the Carolinas, and then south on some road that hugged the sides of the mountains (bonus: two genuine through-a-mountain tunnels, which totally impressed Jonas) and brought us past Spartanburg and Columbia SC, then at last over a little bridge and back into Georgia.

It was a loooooooong day. Backed out of my driveway at 4:15 a.m. and pulled into Mom & Dad’s driveway at 5:15 p.m. We shared a number of singalongs en route, including a re-write of “Twinkle, Twinkle, Little Star:”

Overall, though, it was a good trip. The kids were incredible travelers. Susannah was such a trooper! She was a lot more “fun” on this ride than she’s been in the past; she could request songs when we were singing, she played peek-a-boo with a toy elephant’s ears, and she called out at passing big rigs: “Hey, wuck! Go, wuck! Bye bye, wuck!”

My favorite moment with Jonas was when he asked for something to read and I suggested that he check what he’d brought in his backpack. He pulled out his Bible and said, “Oh, this is the best book!” I told him, “You know, I didn’t have my Bible time this morning before we left; do you want to read a Bible story to me?” So he read us the story of Adam & Eve, the “sneaky snake,” Noah’s ark, and Jonah. Even though it’s a little paraphrase, hearing my son read God’s Word was a really special gift.

As we are preparing for Easter, it’s really amazing to see how Jonas is responding to the story this year. He is, first of all, very empathetic to the suffering of Christ this year.

The facts of Good Friday are a big deal – as we drive around town or color or take a bath, Jonas will suddenly tell me, “Mom, you know Jesus was HURT. And He DIED. On the CROSS. And he was DEAD.”

At first, I was concerned that he was too focused on that part of the story, so I made sure that we always told –as Paul Harvey would have it!– the rest of the story. On our way home from church Sunday, Jonas sounded the refrain again. This time, though, instead of telling him the Easter part of the story, I started asking him a few questions.

Jonas: Mom, you know Jesus? Was hurt. And He DIED. Up on the CROSS. And He was DEAD.
Me: Mmm-hmmm. Why did he die?
Jonas: Because the soldiers, they put Him up there, on the cross and He died.
Me: Yep, but why did He have to die there?
Jonas: For the sins. For everybody’s sins.
Me: That’s right, Jesus died for our sins. What’s a sin, buddy?
Jonas: Doing something wrong.
Me: And then what happened?
Jonas: [bursting into song] UP FROM THE GRAVE HE AROSE!

So now I think that he’s got the basic concepts down, and that in bringing it up so often he just simply wants to talk about it. There must be some detail he’s working out in his mind.

I heard someone on the radio, maybe Dr. David Jeremiah?, talk about kids who are raised in Christian homes having what he labeled “pre-conversion experiences,” where they start to understand the meaning of the cross, the basics behind salvation, maybe they even “say the prayer” at a young age – but as their knowledge and walk with the Lord develops as they grow up, they have further experiences in the journey. So I think that maybe Jonas is on the cusp of one of those kind of moments. It’s very intense for me; as a mom this is one of the most significant jobs I see before me: leading my children into a relationship with our Savior. I’m praying for wisdom and patience and the right words at the right times, and I really just have to leave it in God’s hands, I think.

Susannah’s life is a little less complicated than her brother’s right now. 🙂 Her days seem to revolve around finding something to take apart and/or put back together… or something to climb… or something to knock over. As a result of these adventures, she will probably look like a prizefighter who went 8 rounds and lost in her Easter pictures. Cuts, scrapes, bruises, and bumps – oh, my! At the moment she’s got a goose-egg on her temple (running into the corner of the dresser), a big abrasion on her cheekbone (twisting as she came down the slide and landing on her face), a red mark on her nose (carpet burn from a race down the hall with Jonas), and some scratches on her chest of unknown origin. She’s exhausting!

She’s up to about 16 words now, with the newest ones being please, hairbow, cracker, hat, and bites. Her bedtime routine, after singing and nursing, now includes her patting my chest and telling me “Aw-duh” {all done} and then when I put her in her crib, she waves at me and says “Nigh-nigh. Bye-bye!” At least that part is easy…. she’s teething again (a molar and a canine at the same time – HORROR) so she’s waking up many times a night the last few days.

And the latest we-could-just-eat-her-she’s-so-cute move is giving kisses – to Mommy, to Daddy, to Jonas (if he’ll hold still), and to all her baby dolls. She puckers up and makes the “mwah” sound and everything. I turn into a big puddle of lovey goo every time she does it – especially when she’s kissing her “babies” and doesn’t see me watching her. Ahhhhhh! It almost makes up for The Crazy she causes the rest of the day.

And in whole-family news, we’re going on a site visit in May! Chris has been talking with a practice in western Kentucky, and after seeing his CV and exchanging emails and a few phone calls, they are ready to interview him – and we get to interview them, too. We’ll be out there May 9-11, taking our tours (Chris will go on a tour with the surgeons to check out the practice facilities, the hospital, boring work stuff… I’ll be meeting a few of the surgeons’ wives to see one of the area churches and adjoining preschool, the downtown shopping areas, some of the local ‘sights’, the fun stuff!) and having Chris’ formal interview. Please pray with us that we’ll have a clear sense of whether this is where God is leading us for next year!

How does your garden grow?

We put in a little 4×8-foot garden this year. It was my first attempt at growing anything other than a few houseplants back in Florida. I really didn’t know what to expect, but I did a little reading online & with library books and went to it. I figured a raised-bed would work best for us, since it would be small and manageable. Plus, we have super hard, thick clay in our backyard – it would have taken a LOT of work & amendments to make it garden-ready soil. So we dug up the sod, nailed together a couple of 1×8 boards, laid out a layer of newspaper, and filled the box with bought dirt.

I got tomato seedlings, but we planted everything else from seed: peas, beans, mesclun, cucumber, carrots, squash, and canteloupe. A bunny came along and did a number on the squash and cukes, but I replanted the cucumbers and they came back up. Then my friend gave us an okra plant, a pumpkin plant, and a zucchini plant to fill in the empty spaces.

Compared to my parents’ garden, we’ve got nothin’! But we’ve eaten a few cups of lovely fresh peas (which is funny, because if they’re cooked, Jonas says “I can’t eat these, they are Yuck,” but outside with bugs and dirt? They are apparently delicious) and three little grape-sized tomatoes and one medium tomato. We’ve got bitty green beans that aren’t ready to pick yet, and blooms on two of the three remaining cucumber plants as well as the zucchini.

Our Memorial Day weekend was spent driving south to Calhoun for Andrea’s high school graduation. It was a long trip, but totally worth it for Chris to be there when his little sister hit this milestone!

Proud Mom and the Graduate

Hanging out at the graduation party:

Jonas was SO happy it was a pool party!

Hey, y’all!👋 There are some new friends aroun

Midweek in my Mäksēlife! This week has been a

The winner of my Mäksēlife giveaway is.... @_ka

When plans go flat — friends who will drop every

GIVEAWAY is now closed! Thank you for entering! ~~