I’ve had a lot of time to get ready to type this.

My mom is entering hospice today.
My dad blogged about it here, if you want to read more about her condition and this decision.
I keep trying to write about it, but what comes out is either way too intensely personal to post on the blog, or else is so generic and stilted that it sounds awful. Maybe this horrid numbness will wear off and I’ll be able to write about it eventually. Until then, my dad’s words will have to do.
I’m sure you know we covet your prayers. Thanks, friends.
Leave A Comment

Our family lost a dear woman on Monday night. A long time ago, we called her Grandmother Nancy – but when Jonas came along as a young talker, he renamed her “Yaya” out of the clear blue sky. We don’t know where he came up with that moniker, but it stuck and pretty soon we all called her Yaya.
About a month ago, Yaya was diagnosed with AML – acute myeloid leukemia – about a month ago. This past Friday, she was hospitalized with what appeared to be pneumonia. Monday night, she passed away. While it was sudden, it wasn’t totally unexpected because of this form of leukemia.
We are so sad that she’s gone. Last night when I was lying in bed, I remembered one year (was it Thanksgiving? or Christmas time?) that Yaya had found a recipe for Chex mix and she wanted to try it out. Donna and Missy and I were all there – and maybe Laura and Andrea? – and we had all the ingredients spread out all over the kitchen counters while the guys were watching football. Karl made some joking comments about how it would have been cheaper to just buy a bag of pre-made Chex mix, and Yaya told him, “We are not making Chex mix here! We are making memories.” She was so right. 😉
Her funeral will be this Friday in Cedartown, Georgia. You can view her obituary online by clicking here.
Leave A Comment

Say Hello to My Little Friend 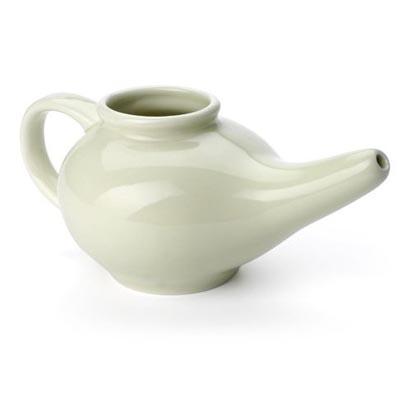 I have no idea what to expect when I go use this in a few minutes, but it seems like everyone in the world has hopped on the neti pot bandwagon and insists that I get one for my sinus pain and congestion (which has lingered, even though my other symptoms are gone – other than the cough).

Guess what? I love my mama. So today’s a GREAT day.

My mom is in remission! My heart is so full. The odds were not with us on this – but our God certainly has been with us every step of the way. She still has to have bloodwork and scans next month, and then repeat tests every three months, but we’ll take it. Just knowing that she’s okay for now is AMAZING!
~~~~~~~~
“Then Job replied to the Lord, ‘I know that you can do all things; no plan of yours can be thwarted.'” Job 42:1-2
~~~~~~~~
“Ah, Sovereign LORD, you have made the heavens and the earth by your great power and outstretched arm. Nothing is too hard for you.” Jeremiah 32:17
~~~~~~~~
“Jesus looked at them and said, ‘With man this is impossible, but with God all things are possible.'” Matthew 19:26
Leave A Comment

Denial is an Exit somewhere in the middle of Tennessee 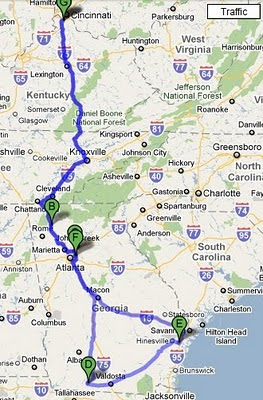 This week is going to try my patience. My nerves. My mothering abilities AND my driving abilities. For this week, my friends, I’m going to be driving from Elsmere to Calhoun to Doraville to Thomasville to Midway to Decatur to Elsmere. In seven days.

Tomorrow morning we’ll head out early, put in at least six hours on the road, then make a layover in Calhoun to see Mimi and Aunt Andrea (who’s been stuck at college the last few times we’ve blown through town) for a brief pit stop. Then we’ll buckle back up and drive another two hours to my brother’s house. Unna Jay-jase and Shay-ray (in Susannah-speak) have graciously opened their home to us for an overnight – and we’re really excited about seeing them & Dylan again.
Monday morning, we hit the road again and head south for Thomasville, where my Grand-Maxwells will meet Susannah for the first time! (Ack. Feeling a little guilty that she’s a few months shy of TWO and I haven’t taken her down there yet.) I am already anticipating that leg of the trip, actually… I’ve been pulling into that driveway, roadweary and worn, at least once a year or once-every-couple-years for my entire existence. There is nothing quite like coming home to my Grandmama’s house.
We’ll head out Tuesday afternoon for Midway. My mom’s chemo schedule has changed, so we will likely be taking her to Savannah for her appointments on Wednesday and Thursday (glad I planned at least a *few* days to stay and help out). Then we’ll pack up again on Friday morning.
That afternoon, we should cruise into Decatur to see my dear friend Holly. We saw her back around Christmas, but it has been awhile and I’m looking forward to an evening of our nonstop girl chatter. We can seriously cram more words into any given minute than seems humanly possible.
Saturday morning I will probably feel more like kicking my car than driving it… but we will once again head ’em up and move ’em out. Destination: home. Chris will be back from D.C. and off work, so at least I’ll have that to motivate me on the drive back. When we arrive here, I fully plan on giving him a quick kiss, handing over both kids, and going to sleep for at least six hours. (I think I’ll deserve it, don’t you?) At that point, I might feel somewhat human again.
Leave A Comment

We rolled into Midway on Tuesday, expecting that my mom would start chemo the next day. There was some confusion or miscommunication with her doctor and his office staff/schedulers, though, so she actually had her first treatment on Thursday.

She got several “extras” first (fluids, anti-nausea meds, a corticosteroid) and then an IV each of carboplatin and taxotere. We were all really thrilled with how well she has tolerated these drugs! The first day after chemo she felt pretty great – she had enough energy to fold a load of towels and point & direct me in re-organizing a couple of pantry shelves that were getting on her nerves. 😉 Day two and three found her much more tired, which is to be expected, and she has started having some nausea – but she says it’s really not the sensation that she’s going to throw up, it’s more like vertigo or seasickness when she moves around.
It’s been a good trip. I’ve been able to do quite a few things for Mom (I’ve made two meatloaves! Chris said, “Every time I talk to you I think you’re making meatloaf!” LOL – hey, if she’s hungry for meatloaf & will eat it, I’ll gladly make her a dozen!)…. some cooking, some light cleaning, a plenty of organzing. Her “catalog basket” was all out of order — she keeps them alphabetized, for Pete’s sake! — and she wanted to refresh the greeting cards that are on display in the living room since so many new ones had arrived. So we’ve done those little projects, and I’ve driven her into Hinesville for a couple of doctor’s appointments, and we’ve just had nice relaxing time to chat.
The kids have been loving it, too. Our last trip ended up being much longer than I’d anticipated and they started getting restless toward the last few days. This time I brought a bag of crafts and diversions, which was good. Plus, Mom wasn’t in the hospital this time, so they have been able to see her and Dad each day 😉 My dad took them out to dig up sweet potatoes on Sunday afternoon — what a hoot! They were both COVERED in sandy soil when they came inside – Susannah even had grit in her ears. Jonas had his hands deep in the dirt and sighed, “I *love* being at this house.” How precious to hear that.
My brother Jason and his wife Sharon came in late Friday night and stayed through Sunday morning. Susannah started calling him “Unna Jay-jase” and didn’t quite manage a name for Aunt Sharon, but she did warm up to her compared to our last meeting with them. Of course, Jonas loves them both to pieces and was quickly jumping all over Jason, playing shooting games with him, and talking about Ironman, Spiderman, and Batman until they were blue in the face.
On Sunday, Mom wasn’t feeling up to heading into town for church, so Dad went early for both hours and the kids and I followed for worship service. Jonas & Susannah really love seeing Granddaddy up in the pulpit. When it’s time to pray, Susannah shouts out, “AMEN!” before they get started, and when Granddaddy starts preaching, she hollers, “Mo’ Jesus!” (This kid has soul, what can I say?) Jonas even left the service to go to Children’s Church.
She’ll have her next chemotherapy session on October 1st, so I’ll probably plan to come down again the week after that.
Leave A Comment