Solving the Mystery of Susannah’s Poofs

After baths, I always blow-dry Susannah’s hair. She almost always asks me to “make it poofy.” I have tried everything I can think, over the months, only to have every hairstyle rejected. Some with crying, even, and heartbroken wails of “that’s NOT poofy!”

Tonight I had an epiphany when she made her request. I stopped the dryer. “Susannah, do you want your hair to look like Bella’s?”

So I had to explain that Susannah’s hair is like mine, and I can make our hair can lay straight or stay curly, but I can’t make it “go like Bella’s.”
((Bella is a younger toddler at PDO, maybe two years old. She wears her hair in beautiful, natural, Afro-puffs {do they still call them that?!}). 😉 How sweet and funny is that?
Leave A Comment

I overhear some cute conversations. Tonight, S helped A fall asleep. (I have NO idea why this worked, but apparently it did.)

We celebrated Jonas’ 7th birthday on Saturday, 2/2. {Which is also Groundhog’s Day, and the 12th anniversary of our engagement. Fun times.} Nonna and Poppa came up from Cedartown so that the kids’ cousin Ethan could be at the party. 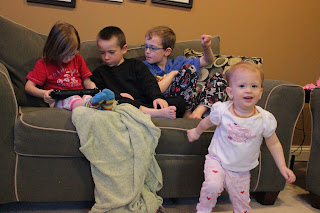 The newest obsession around here is Super Mario, so we had a fun theme for our party! I found a set of wall stickers with all the characters, and of course we had streamers and balloons: 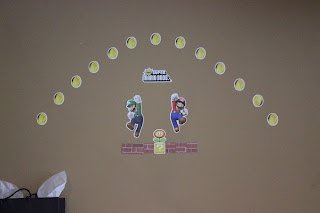 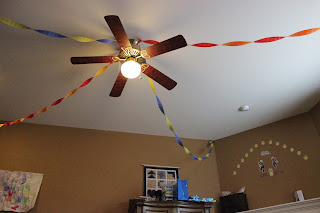 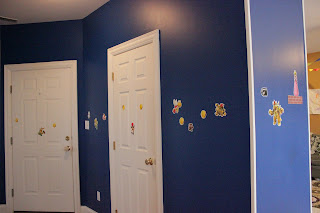 We got a Starman Power pinata (and filled it with chocolate gold coins, gold-wrapped caramels, STARbursts, and “fireball” cinnamon candies). 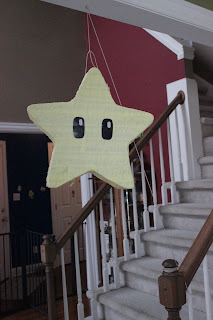 The Cup Cakery did an amazing job with his two-tiered cake (I bought a set of five little character/block sets; everything else on the cake is edible). 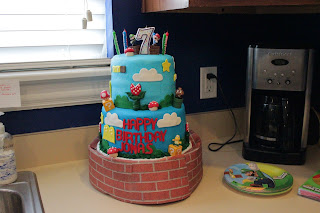 We made a piranha plant centerpiece (painted a clay pot for the pipe; paint + felt + styrofoam ball for the plant’s head; painted a dowel for the stem). Jonas wanted a tray of nuggets, a fruit tray, chips & salsa, and a platter of pickles and olives for his “party food.” That was easy enough! 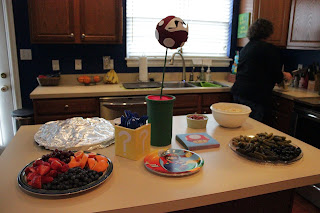 I bought a jumbo pack of adhesive mustaches so we could all look like Mario and Luigi (but most of the kids shed their ‘staches pretty quickly. I guess the adhesive tickled). 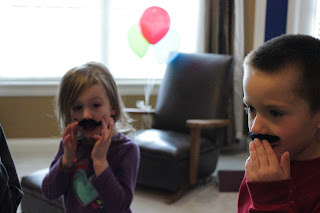 We played Goomba Stomp — brown balloons decorated with Goomba faces — and they had a blast popping them! 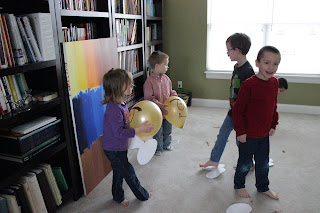 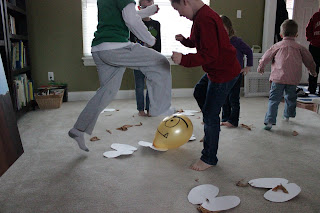 Pinata time! One of the kids swung so hard, he broke the foam bat. They took turns punching and kicking it, but we ended up letting them rip into it and then just pouring the candy all over the floor. 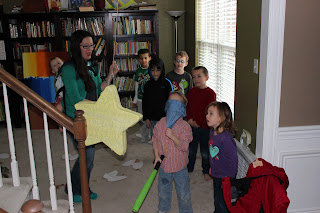 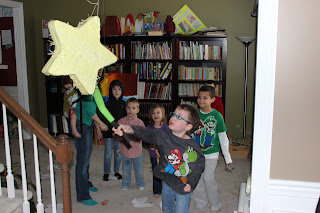 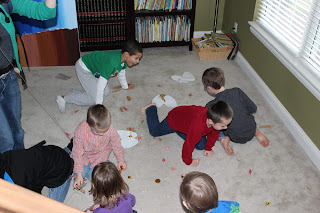 Time to open presents — Jonas was so lucky to get so many wonderful things from his friends! 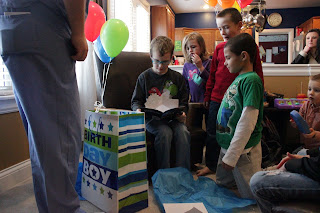 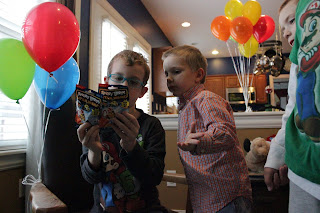 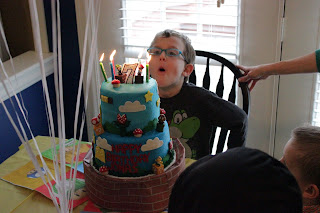 After we ate cake, Chris turned on the Wii and supervised turn-taking while the boys played Super Mario. Some of our guests preferred the new Angry Birds game and Batman toys while they waited for their turn over watching the others. 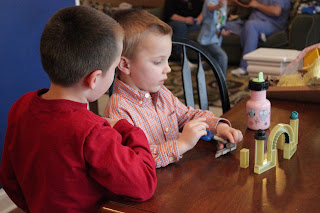 This was the biggest party Jonas has ever had, and by the end –I don’t know about the birthday boy, but Mama was exhausted! We had a great time, though, and I know he’ll remember this one for YEARS. That makes it all worth it. 😉
Leave A Comment 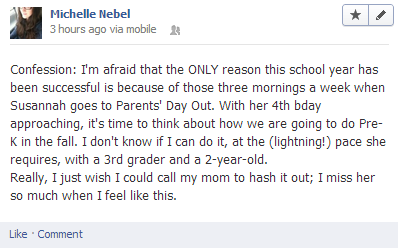 It’s been keeping me up at night for the last few days. It’s constantly on my back burner. And I truly don’t know the “right” answer for us, yet.

Some of the possibilities we’ve talked about:

(1) Preschool at Settle Memorial. They offer a two-day-per-week class at our church, and several of her little friends attend. Some of the kids she is in class with right now at PDO will likely “move up” to the preschool in the fall. I’m sure she’d love the bright lights and colors and kids and teachers — that is her favorite part of the Parents’ Day Out program! Negatives: I don’t know if the academic part will challenge her, and I believe she’s ready for a bit of a challenge in this arena.

(2) Continue attending Parents’ Day Out. This does nothing for her, academically (it really is a play, social, fun-oriented program). She loves it! But she is already one of the older kids in her group and has become, I am told, quite bossy. I worry about the dynamic of being a 4 1/2 year old in a room with 2’s and 3’s. However, this past year I have used those hours she’s at PDO to do the bulk of Jonas’ schoolwork, so I also worry that keeping her home will mean Jonas would struggle with constant interruptions.

(4) Homeschooling for preschool, much like I did with Jonas. The thing is, even if I cover the same concepts for prekindergarten with Susannah, I know I’ll need some new approaches. Jonas was a “traditional” sort of student, in that I could tell him about a new topic, read a book or engage in an experiment or lesson, ask him questions or work on paper to be sure he understood, and move on… On the other hand, if I try to tell Susannah something new, she replies, “I already know that!” 😛 It will be VERY necessary for me to put on my “guide by the side” hat with her (instead of my “sage on the stage” hat, for those of you who sat through Dr. Walker’s early childhood ed classes with me). I would also need to have good plans in place for physical & social outlets and experiences for her (possible: dance, gymnastics, karate?, swimming, continue at Homeschool Gym, continue with Homeschool Primary Play).

I think I need to keep a few things in mind, moving forward into a decision:

It’s only four weeks until Christmas break! So far this school year, I’ve been planning one or two weeks of lessons at a time. (That was usually how I did things when I taught public school, too. Planning bigger blocks of time inevitably led to frustration when we’d miss an activity here or there… I’d have to cross it out or rewrite it… and I’d feel angsty about my now-messy planbook.) This weekend, however, I’m sitting down to plan out the next four weeks.

I’m going to plan out our math, science, handwriting, phonics, and writing lessons, as well as holiday activities, in detail. We are ahead of the curve in math, so by looking ahead over the month, I’ve spaced out some of the curriculum lessons and will interject a few review days so that we’ll complete the unit “on time.”

Our Tapesty of Grace materials are the most time-intensive, so “lesson planning” in that area actually involves a lot of reading on my part, then picking and choosing from the smorgasbord of suggested activities and books, and arranging them in an order that flows with our weekly schedule. So I’ll plan this upcoming week TOG in detail, and *if* I have time I’ll plan ahead. If not, I’ll continue to plan TOG lessons each weekend. The next four weeks will take us back to the Promised Land, in the time of Joshua, the judges, and King Saul and David. I’m personally excited about seeing new connections I’ve probably missed, even after growing up hearing some of these Bible stories my whole life!

Mainly, though, I want to make sure I have holiday crafts and activities for Tuesdays and Thursdays this month (when we are all together). I’ll be moving my collection of Christmas books into the family room when I put away the Thanksgiving books – but I set aside a few titles so that we can read them together with special focus. The Littlest Christmas Tree: A tale of growing and becoming by Janie Jasin, The Littlest Angel by Charles Tazewell, The Crippled Lamb by Max Lucado, and How Many Miles to Bethlehem? by Kevin Crossley Holland will each coordinate with a craft for the kids. In some cases, I’m planning two separate crafts for Jonas & Susannah’s differing abilities.In addition to the “school” things I’m planning, we’ll bake plenty of Christmas goodies and watch all the favorite shows and movies. I’ve got my iTunes Christmas playlist fired up, and we have a CD in the car to help us learn all the music for the church play (Susannah is going to be a lamb; Jonas refuses to get on stage and plans to watch from the pew). We’re going to have a Thanksmas celebration on December 8th with my Dad and Barbara, our Sunday School party on December 9th, and another Thanksmas on December 15th with Chris’ mom and sisters, so we get to spread out the cheer the whole month long.
Leave A Comment

At least she was being quiet.

When I opened Susannah’s door at the end of Quiet Time today, I quickly noticed a strange bright yellow spatter pattern all over her white bookshelf. My brain raced to process this: not pee, not vomit, what IS that? Then I spied a similar spatter pattern on the other end of the shelf, in bright pink.

“Oh, Mommy,” she started. Her tremulous voice told me that she was excited and proud of herself, but afraid she was about to get in trouble. “It is amazing. I can TRANSFORM my spit! See!”

“Did you know that? If you chew up a crayon…. It will transform your spit! Into paint! Hey!!!” she got louder, exuberant in this discovery. “Jonas! Come see! I have transforming spit!”

I left to get a towel. We cleaned the shelf; we brushed her teeth. I’m still a little stunned by this one. What possesses her?! All I can say for today’s QT is: at least she was quiet up there.